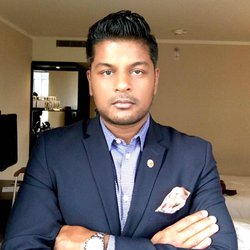 Richie Etwaru brings breadth and depth in his experience as a C-level Fortune 500 Company executive, one of the first Chief Digital Officers in the world, a serial author, owner of international patents, founder of multiple ventures, an experienced keynote speaker, an angel investor, a member of advisory boards, the owner of restaurants, and a recognized thought leader in the area of digital, technology, and design.

Richie is an adjunct professor of blockchain management at Syracuse University in New York. He has delivered over 100 blockchain keynotes across the world and has written some of the most read blockchain blogs as of this writing. His interviews on blockchain, advisory work with governments and venture funds, and TEDx talk titled “Blockchain: Massively Simplified” delivered in March 2017 has unlocked potential and identified opportunities for hundreds of organizations.

On a personal level, Etwaru is a thinker, a tinkerer, and a bit of an intellectual threat. He debates, deciphers and decides at the velocity of thought. This is a quality most of his friends, colleagues, and family prefer he slowed. He is married to his love Vashti, lives in Edgewater New Jersey, USA, and is a lover of spicy food. 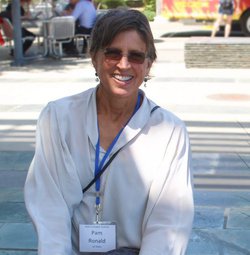 Pamela Ronald is a Distinguished Professor in the Department of Plant Pathology and the Genome Center at UC Davis and also serves as Key Scientist at the Joint Bioenergy Institute in Emeryville, California and Faculty Director of the UC Davis Institute for Food and Agricultural Literacy. In 2017-2018 she is serving as a Fellow/Visiting Professor in the Center for Food Security and the Environment, Stanford University.

Ronald’s laboratory studies the genetic basis of resistance to disease and tolerance to stress in rice. Together with her collaborators, she has engineered rice for resistance to disease and tolerance to flooding, which seriously threaten rice crops in Asia and Africa. For example, Ronald and collaborators discovered the rice XA21 immune receptor and the rice Sub1A submergence tolerance transcription factor. In 2015, five million farmers planted Sub1 rice varieties developed by breeders at the International Rice Research Institute. In 1996, she established the Genetic Resources Recognition Fund, a mechanism to recognize intellectual property contributions from less developed countries.

She and her colleagues were recipients of the USDA 2008 National Research Initiative Discovery Award for their work on rice submergence tolerance. She was awarded a Guggenheim Fellowship, the Fulbright-Tocqueville Distinguished Chair, and the National Association of Science Writers Science in Society Journalism Award. She is an elected fellow of the American Association for the Advancement of Science. In 2011, she was selected as one of the 100 most creative people in business by Fast Company Magazine. In 2012, Ronald was awarded the Louis Malassis International Scientific Prize for Agriculture and Food and the Tech Award for innovative use of technology to benefit humanity. In 2015, Scientific American selected Ronald as one of the world’s 100 most influential people in biotechnology. In 2016, Grist magazine named Ronald as one of 50 innovators who will lead us toward a more sustainable future.

Pamela Ronald has written opinion pieces for the Boston Globe, The Economist, The Boston Review and the New York Times and is a blogger for Scientific American’s “Food Matters” blog and a cofounder of Biology Fortified Inc. an independent educational non-profit organization. She is coauthor with her husband, Raoul Adamchak, an organic farmer, of  ”Tomorrow’s Table: Organic Farming, Genetics and the Future of Food.“ Bill Gates calls the book a “fantastic piece of work“ and “important for anyone that wants to learn about the science of seeds and challenges faced by farmers.“ Her 2015 TED talk on plant genetics, food security, and sustainable agriculture has been viewed more than 1.5 million times and has been translated into 24 languages.